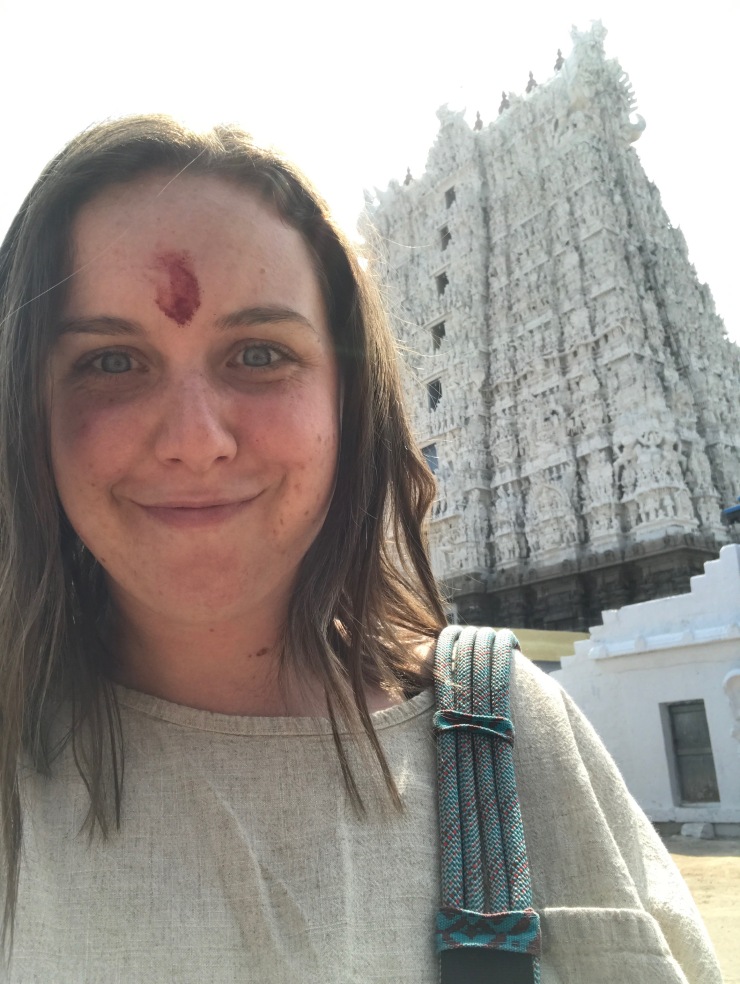 Currently it’s Sunday afternoon. I have kumkum and sandalwood on my forehead. My hair smells like temple and Dahl.

I ate my banana leaf meal for lunch, and have had an abundance of coffee and fresh squeezed pomegranate juice for breakfast. So unbelievably perfect! (There’s actually more coffee at 4pm at the hotel we just arrived at.) I have a few hours break until I head to the sea to watch the sunset at the most southern tip of India, Kalikamari.

I visited my first Hindu temple today – the Shri Hanuman Mandir temple in Sarangpur which has an 18 foot Hanuman, the monkey god, inside. Hanuman is all of the movement that happens in the body – prana. Hanuman is the loyal friend of Ram, who have many adventures together. (There’s so many more stories I need to learn!)
The temple is like the cloisters if you’ve ever been. A huge structure with many different altars inside. Some open spaces. Flowers, garlands, candles, kumkum, turmeric – all as offerings on or around the statues and engraving on the wall. I walked around the area of the planet statues, 9 times, following Allison. Walking around is said to counteract any negative astrological effects of the planets. I mostly feel like it was just a special thing to do, having started the Vedic astrology bits. I was barefoot the whole time.

I realized today, that of all the places I’ve been, India – southern India – is the only one to where I’ve returned. It’s new and feels different than last time, but I think it’s mostly because I’m different than I was the last time I was here.
But I like returning here. I missed it. Or rather, I missed me in this place. I am so grateful for the next 2 weeks. 🙏🏽